This is first in Recycled series from Harsh Noise London label. Just by seeing four projects that are involved in this tape is enough to realize this will be very nice and loud release.

Tape starts with Animal Machine. Interestingly, i saw this project many times live in some festivals, and it was always kick ass performance - but this is first time i listened it on tape. (now i realize how stupid i was not to trade for some releases on those festivals) Both are typical Animal Machine track - no compromise, loud - pure harsh noise. Its 15 minutes of pure enjoyment (if you like nice and pure harsh noise like i do...)
Next project is PCRV - only project i didn't know about before this release (which is a shame because i see on discogs that it is active for 15 years already!), its just a bit less harsh probably because it has some interesting atmospheric elements along the noise, some high pitched sounds echoing in the background that is mixed with very harsh and loud rumble. All together it is fine combination of harsh noise and some more listenable elements. Quite enjoyable experience! Hope i get some full release of PCRV because it sounds very promising...
Side B starts with GEN 26. If someone don't know (if that is possible at all) behind this project is Matjaz - guy from Slovenia that made 10+ noise festivals in Ljubljana,Slovenia (it is real achievement - in this region even making noise gigs is very hard and number of people interested is more than low, and organisation of this festival was more than professional with always fine international lineup)
His sound on this one is very dense and not very dynamic - almost a borderline with HNW - but much more aggressive than any HNW - its literally ripping your ears (in my opinion 99% of HNW releases are more ambient than harsh, which one wouldn't expect from something that has harsh in its name).
Last one is NRYY - one of project that have special place in my mind - not only because of sound but because it was first CDr i got beside my copies after i made my first physical release on Smell the Stench label. Its typical Japanese harsh noise - very dynamic with scream like sounds and a lot of feedback. Very fine ending to this 4 way split!

So since there was an open call for participants for this series during Slovenian noise fest this summer, i suppose more releases are not far away. Cant wait to see whom will next ones bring!
Meanwhile - grab some copies on  https://www.facebook.com/groups/1753676681522146/ 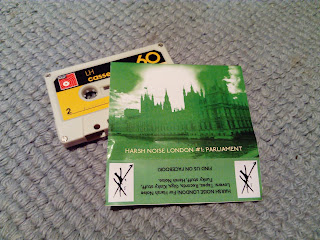